What a US President Taught Me About Time Management

Did you know that Dwight D. Eisenhower was a boss?! Like serious Rick Ross “The Boss” style! 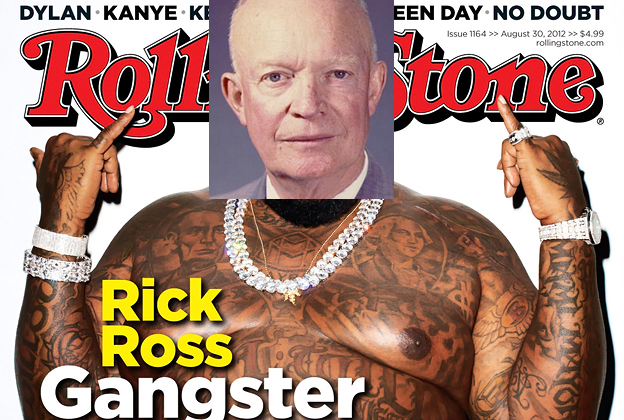 Eisenhower lived one of the most productive lives you can imagine. (He very well could be the ACTUAL most interesting man in the world.)

Here’s a quick rundown of what he accomplished:

And if that weren’t enough… he also oil painted. (Yup, oil painting.) 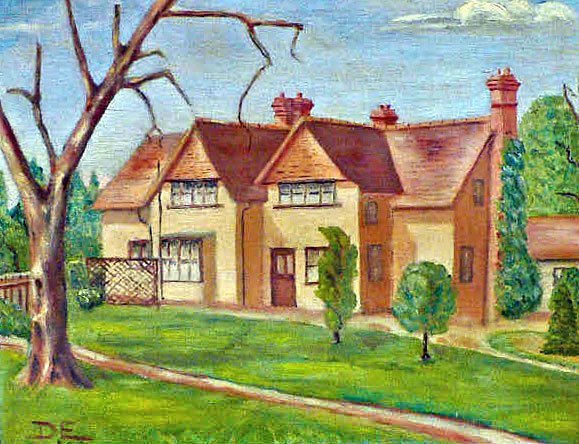 One of Eisenhower’s oil paintings

Dude got sh!t done! And the question that should be on your mind is:

What was Eisenhower’s secret?!

The answer: the way he MANAGED his time.

Okay, so his secret wasn’t some fancy, schmancy technique, but it works!

By managing his time, Eisenhower carefully organized it so that the most important work got his attention. His mantra (and it’s one you’re going to want to adopt by the end of this) is:

In other words, if you want to be effective (and be a Boss like Big E) you have to spend your time working on important, rather than urgent work.

Of course, just because something makes sense doesn’t mean it’s easy to do. One of the challenges of managing time (other than procrastination) is figuring out what’s ACTUALLY important and what’s not.

This is way easier than it sounds!

Since Eisenhower was such a freak of nature when it came to managing his time, he developed a time management tool called the Eisenhower Matrix to help make the prioritization process that much easier.

What IS the Eisenhower Matrix?

The Eisenhower matrix allows you to evaluate your work and set priorities, and it does this by categorizing your work into 4 possibilities: 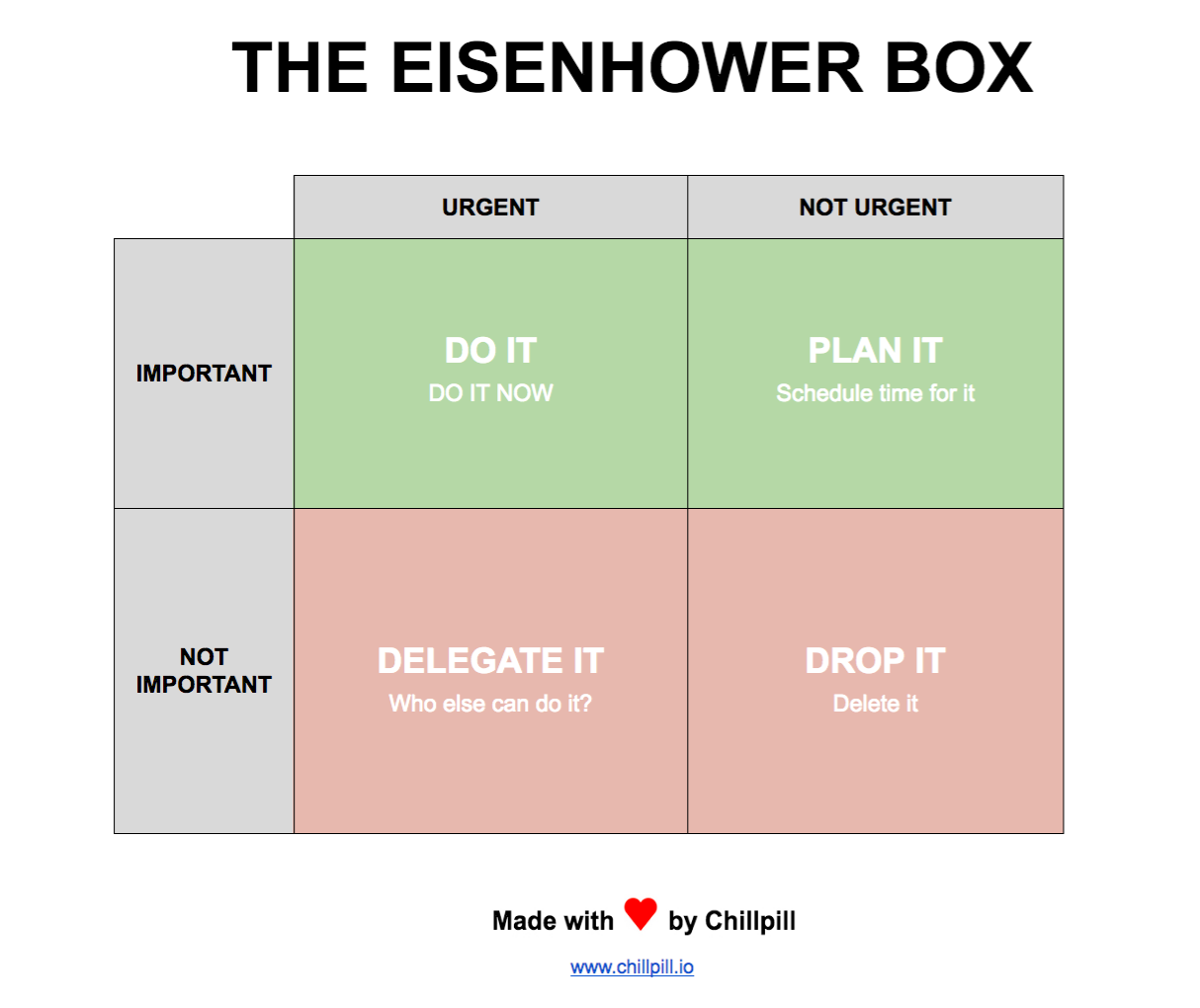 Do yourself a favor and save this image right now!

The best thing about the Eisenhower Matrix is that it helps you distinguish between what’s actually important and what’s urgent.

The matrix helps you to remain focused on only the important tasks that meaningfully contribute to your goals and helps you make effective use for your time. (Coz ain’t nobody got time to waste!)

Let’s look at the difference between those two things real quick.

Up to this point we’d talked about the 4 categories, but we haven’t really spent time defining the difference between what’s important and what’s urgent.

The truth is, it’s really hard sometimes to tell the difference, and a LOT of people believe that if they just work that they’ll get closer to their goals.

Just because something feels important doesn’t make it important – it’s just some dumb, silly task disguises as an important task.

Those tasks that shout “NOW!” at you aren’t important – they’re urgent. The problem with urgent tasks is they “require” immediate attention.

This sense of immediacy puts you in a “reactive” mode – one that makes you feel hurried, stressed, overwhelmed, [insert negative feeling here]. Spending your day “putting out urgent fires” is the reason you feel busy, but realize you got absolutely NOTHING you wanted done.

And that is ultimately the WORST thing about urgent tasks – they steal you of your time. (And we both know that’s a limited resource.)

However, if you focus on important tasks, you’ll be able to takes steps that will get you closer to your goals – whether they’re staying fit, getting financially secure, or advancing your career. As Brett McKay puts it, “Important tasks are things that contribute to our long-term mission, values, and goals.”

Important tasks puts you in a mode where you’re in control of your time – it’s the difference between being proactive vs being reactive.

Knowing the difference between what’s important and what’s urgent helps you overcome your natural tendency to focus on unessential activities that don’t add to your success.

“Being busy is a form of laziness — lazy thinking and indiscriminate action.” – Tim Ferriss

In today’s fast paced world it’s critical to distinguish between what’s actually important and what gets in the way of the important.

We’ve all had days where we run around like chickens with our heads cut off, work hard, get things done only to realize at the end of the day we actually accomplished very little….close to NOTHING!

It’s easy to get caught in the trap of overcoming this frustration by staying busy and telling yourself that you just need  to work a little later or a little harder. But this isn’t the best use of your time.

By using the Eisenhower Matrix, you concentrate ONLY on what really matters. This will increase your productivity and eliminate things that, in the end, just waste your energy and time.

I love the Eisenhower Matrix because it provides a CLEAR framework for making decisions…over and over again. How amazing is it that four little squares can help you see the tasks you’re neglecting and the ones you’re wasting your time on?

So…what are you working toward right now?

What do you really need to do to get you closer to your goal?

The Eisenhower Matrix can help you figure that out so you can “build dreams with elevators in them”! 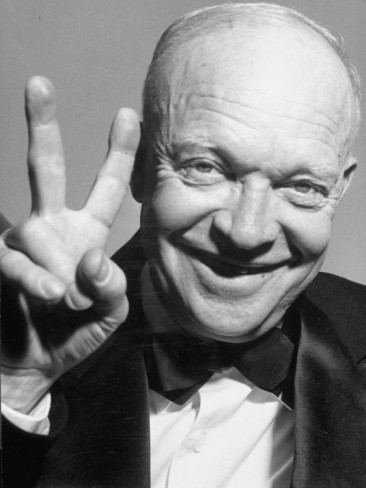 Tools to Help You

To help you apply the Eisenhower Matrix, we suggest checking out the following tools.

Eisenhower App. Eisenhower Matrix iPhone app. I played around with it a little bit (not too much) and liked what I saw. Check it out and let me know what you think.

If you found this helpful, make it a prioritize to share the Eisenhower Matrix and this article with your peeps!

Inside Out the Emotions Behind Procrastination

INTRODUCTION Why do we procrastinate? The short answer is pretty simple, I think. Procrastination is more than you simply spending...