The 3 Things that Make Up a Habit

In this article, we learn what a habit loop is, why some behaviors become habits, and we’ll show you how you can overcome them.

The first rule of habit-changing is that you have to play by the rules. You have to understand how something works before you can tinker with it – understanding how habits work is no different.

The good news is the science behind how a habit works can be explain with a simple 3–step loop. Charles Duhigg explains this in his bestselling book, The Power of Habit through something he calls the Habit Loop. (Highly recommend this book since it does a great job diving into the science of habits to explain how they work. However, I, personally, think it falls short in terms of teaching people how to change habits.) 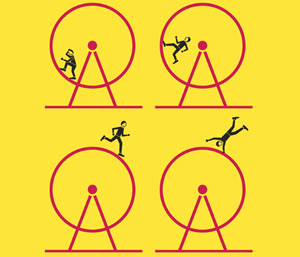 Image courtesy of The Power of Habit

1 – The Cue (the trigger that initiates the behavior)

2 – The Routine (the behavior itself; the action you take)

3 – The Reward (the benefit you gain from doing the behavior) 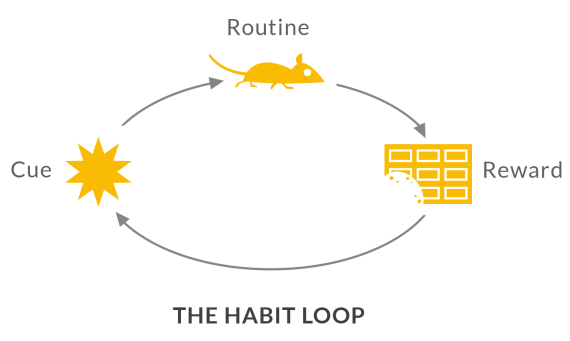 Image courtesy of The Power of Habit

First, there is the Cue – the trigger that initiates the behavior. Next comes the Routine, which is the behavior itself – the action you take. (This doesn’t have to be a physical routine. It can also be mental or emotional as well.) Lastly, we have the Reward, which is the benefit you gain from completing the behavior. The reward will also determine if this is a habit loop the brain wants to remember for the future. And there you have the Habit Loop. Pretty straightforward, right?

It’s one thing to test this theory on a bunch of lab rats. It’s another when we can apply it to real life. 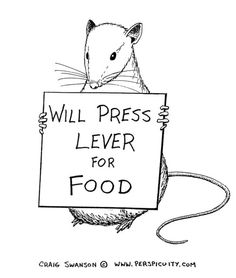 HABITS AND YOUR BRAIN

For most of us, the “text message” example is a positive habit loop, not a negative one.

With positive habits, your brain gets a sense of satisfaction from the behavior. After the loop is complete, your brain basically tells itself, “Oh, I like that. Next time that cue happens (in this case vibrating cell phone), make sure to complete it.”

Once the brain craves the reward, the habit becomes automatic. If you repeat this cycle enough times, you’ll stop thinking about the loop – your behavior will become a habit.

The problem is, since all habits follow this habit loop, your brain can’t differentiate between a good habit and a bad habit. This is why it’s hard to break bad habits. And you have your basal ganglia to thank for this.

This is Your Brain on Habits… 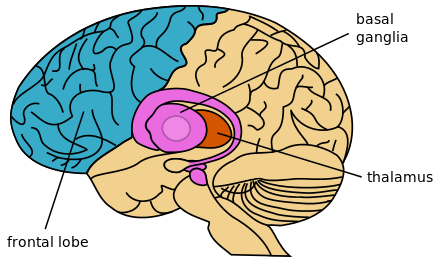 As you can see in the diagram, the basal ganglia is part of the brain. (Thanks Captain Obvious.)

The basal ganglia plays an important role in our habit-making behavior. It’s the part of the brain that controls the development of emotions, memories and pattern recognition. This is not the “decision-making” part of your brain. That is controlled by the prefrontal cortex (but who cares about that thing?).

WHY DO WE NEED HABITS?

When we first engage in a new task or a new decision, our brains work hard because it’s processing tons of information. This requires a lot of mind energy, and the truth is, your brain is lazy. Super lazy. So your basal ganglia takes these decisions and automates them to reduce the brainpower needed, which basically putting your brain on cruise control. Unfortunately, the brain really doesn’t discriminate between the bad habits and the good ones. Once a routine is sorted into the “automatic” category, it’s hard to get it back out. That’s why habits are sticky and hard to break.

When was the last time you had to consciously think to check the rearview mirror when you back your car out of the garage?This sounds dangerous, but if you think about it, it makes perfect sense. Ask yourself this:

Think about how hard you concentrated the first time you backed your dad’s car out of the garage when you were 16 or 18. Compare that to the amount of mental effort you put into it now. It’s just something you do now – habitually. It’s natural.

Because at first, it was new and uncomfortable.

Your brain was working on overdrive to make sure you followed all the steps you needed to complete before you could successful back the car out of the garage without destroying it. But after awhile you grew comfortable with the process, so you start to think about it less and less until it became a habit.

Your basal ganglia is the reason why you don’t think about all the tiny little details that go into backing up your car. Your brain saved this habit loop because it liked the reward – not wrecking the car or injuring someone.

As soon as a behavior becomes automatic, the decision-making part of your brain goes into sleep mode. The brain kind of shuts down, which allows you to focus all of your mental energy on other more important things like singing along to Taylor Swift’s latest song that bashes some dude.

The brain’s constantly trying to be more efficient, so it quickly transforms as many tasks and behaviors as possible into habits with the help of the basal ganglia so it can do things without thinking about them (again, super lazy). At its core, a habit is simply a set of actions that has been automated. You don’t expend energy thinking about it — you just do it. Research shows that over 45% of your daily routine  is automated by habits. Like I said…LAZY!

That’s basically how a habit is formed.

Where Do I Go From Here?

Want to get rid of a bad habit? Click Here to learn the 4 Steps.

So great, now you know how habits work. Now what? Well, you now know how to hack this loop. It’s possible to use the science of habit change to your advantage to either introduce new habits into your life, or change existing, hard-wired behaviors you’re tired of.

Understanding how the Habit Loop works helps us create new habits. You just need to design a new habit loop, go through it over and over again until the loop becomes a habit.

But of course, it’s easier said than done. We’ve all tried to do this before and failed, right?

Raise your hand if you tried to resist checking your iPhone when you know you just got a text message? It’s almost impossible! Even if you’re sitting in a meeting with your boss, what do you do? You hold the phone under the table to check it. SO.SNEAKY…

If you want to get rid of a bad habit, you have to find out how to implement a healthier routine that leads to the same reward. The Golden Rule of hacking the habit loop is to:

Keep the Cue and the Rewards; Change the routine.
For better or for worse, our habits shape us Click To Tweet

Even though there’s all of this research and science to explain how habits work, there isn’t a secret recipe to change habits instantly. We mention the Golden Rule, but there’s NO escaping the habit loop – it’s hard-wired into our brains (thanks basal ganglia!). Charles Duhigg describes a 5-Step process in his book to hack your habits. (We’ll touch on these steps further in a different post.)

Step 2: Experiment with the Reward

This is the general structure for habit change, but it doesn’t account for the human element. Individuals and habits are all different, so changing habits is a personal experience and differs from person to person – from habit to habit.

We may have similar routines, but the craving and reward may be different. For example, my reward for checking my text messages is because I’m bored and want a sudden jolt of excitement. Your’s may be to make sure everything is okay.

Even though there isn’t a quick fix to habit change, change is possible. It won’t be always be fast, and it won’t always be easy. But if you’re patient and follow the structure, your habits will change for the better. And you just completed a huge step by understanding how habits work.

“Bad habits are like a comfortable bed; easy to get into but hard to get out of.” Click To Tweet
Bonus: Get your Habit Loop Guide here

Here’s What I Want You to Do:

Pick a habit that you want to change (smoking, coffee, etc.) and try to find out what your Habit Loop is. I’d love to hear what habit you plan to work on, so share it with us in the comments.

If you enjoyed this, please share it with someone you like will too! We’d heart you forever.

Why You Need A Habit Buddy RIGHT NOW

INTRODUCTION Have you seen those Army commercials where the slogan is “I’m an Army of One?” Do you remember those?...