Can Helplessness Be Unlearned? 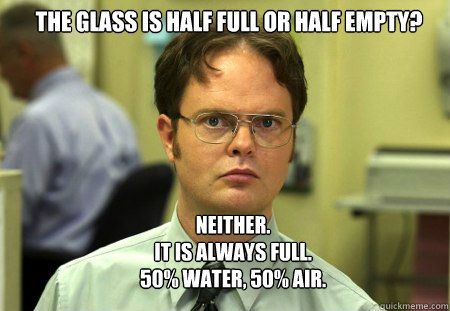 “My first act of free will shall be to believe in free will.” – William James

Have you ever felt stuck because you believed you didn’t have a choice?

Have you felt the stress from telling yourself, at the same time, “I can’t do this” and “I have to do this”?

Have you ever given up your power to choose until you find yourself down a path you didn’t choose from yourself?

One of the hardest things to learn is how to get back on your feet when you’ve been knocked on your ass. Especially when it happens over and over again.

In fact, constant failure and crushing disappointment are two of the biggest demotivating factors you can find in life. When you’ve been hurt enough times, suffered enough times, eventually you begin to believe that you have no other options. Fighting it wouldn’t make any difference.

It’s easier to just surrender – to give up and accept the inevitable and that the situation is helpless.

Simply put, these feelings of failure cause people to give up on the pursuit of their goals and dreams.

I know because I’ve been there.

As a matter of fact, Chillpill started because both Matt and I felt trapped in a life that neither one of us saw for ourselves. We felt powerless to change it. We believed that the, so-called, Powers-That-Be were in control and had decided our fates.

But then we realized that life doesn’t have to be this way. What am I saying? I mean, LIFE ISN’T THIS WAY!

WE ARE IN CONTROL!

WE ARE MASTERS OF OUR OWN DESTINY!

Once we realized this, we started to wonder why we allowed ourselves to feel so helplessness in the first place.

Our questions led us to a condition known as learned helplessness.

(Whoo…that was a pretty intense intro. Before we jump into learned helplessness, enjoy this gif of two bunnies snuggling.)

Okay, let’s get into what learned helplessness is, shall we?

BONUS: Get a cheatsheet of 10 ways to overcome feelings of helplessness

What is Learned Helplessness?

Learned helplessness is the result of repeated failure to control unwanted events or discomfort in your life. When you feel like you can’t escape pain, and you eventually stop trying to avoid the discomfort. Even when opportunities to escape are presented, this learned helplessness prevents any action.

Learned helplessness started with experiments performed by Martin Seligman and Steven F. Maier on a group of dogs conditioned to expect an electrical shock after hearing a tone. (Ummm…not cool.)

The dogs were divided up into 3 groups:

(It’s kind of like Pavlov’s experiment but a little more f*cked up.)

After the dogs were conditioned, they were released…ugh…I mean, they were placed in a shuttle box (pictured below) that contained two chambers that were separated by a low barrier. Being the psychos that they were, Seligman and Maier electrified half of the floor cause…why not?!

(These two dudes were definitely not hugged enough as kids.)

So what did they learn?

Disclaimer: I absolutely DO NOT condone animal cruelty.

Now…with that said, you have to admit the results of this experiment are absolutely mind-boggling. I mean, isn’t it crazy that the dogs in Group 3 made NO attempt to escape, especially since they just had to jump over the lower barrier?!

Why didn’t they try to escape to freedom?

They believed they were powerless. They didn’t know they had any choice other than to take the shocks. The dogs developed an expectation that NOTHING they did would prevent or eliminate the shocks. These poor animals just dealt with the electrified floor because they felt like they lacked any control.

In other words, they learned to be helpless. The scary thing is humans learn helplessness in much the same way.

Writing this is depressing the sh!t out of me! So let’s enjoy some kitties for a hot second!!!

Okay…I feel better. How about you? Good, let’s talk about learned helplessness in people now. (It’s okay, there’ll be some more cuddly animals waiting for you.)

Like the dogs in the experiment, people simply give up in the face of adversity, or when they feel certain there’s nothing they can do to change things or their outcomes if they’re faced with it constantly.

In situations where people feel helpless, they:

A similar learned helplessness experiment was performed on humans, where volunteers were divided into 3 groups. Rather than shock them, they were exposed to an annoying loud noise (probably Nickelback…)

Learned helplessness isn’t just something that’s isolated to a lab; it happens in real life as well.

An example of this is children, especially those who struggle with math. If a child performs poorly on math tests and assignments, they may start to feel that nothing he or she does will have any effect on his or her ability to learn math.When later faced with any type of math-related task, he may experience a sense of helplessness. (I kinda think this happened to me coz I used to be pretty good at math…now I’m afraid to add 1+1…urgh)

Well…do you know anyone who don’t vote?

If they’re the type who believes voting doesn’t matter because things never change, politicians are evil, or one vote in several million doesn’t count, blah blah blah…yeah…that’s learned helplessness (with a pinch of apathy.)

The moral of the story is this: when people feel like they have no control over their situation, they begin to behave in a helpless manner – just like the zapped pups.

They lose their ability to create positive outcomes. They get so used to experiencing and expecting negative outcomes that they create a feeling of helpless.

Rather than looking at difficulties and failures in life as opportunities or lessons to help them grow and improve, these individual start to believe they can hide from pain and failure by…not trying at all. They almost see it as a security blanket.

It’s a self-fulfilling prophecy – by believing they’re powerlessness, these people shy away from opportunities to change, which strengths their feeling of powerlessness.

So..yeah…depressed again. But like I promised, more sweetie animals! This time – puppies!!!

Can Learned Helplessness Be Unlearned?

Well, the answer is YAS!

Whatever you learn can be unlearned. You can override your thoughts, limits and perceptions.

So, what can someone do to overcome learned helplessness and regain confidence and personal power?

I will share two methods I learned and used myself to help me rise above feelings of powerlessness.

Ready to take back control of your life?

BONUS: Get a cheatsheet of 10 ways to overcome feelings of helplessness 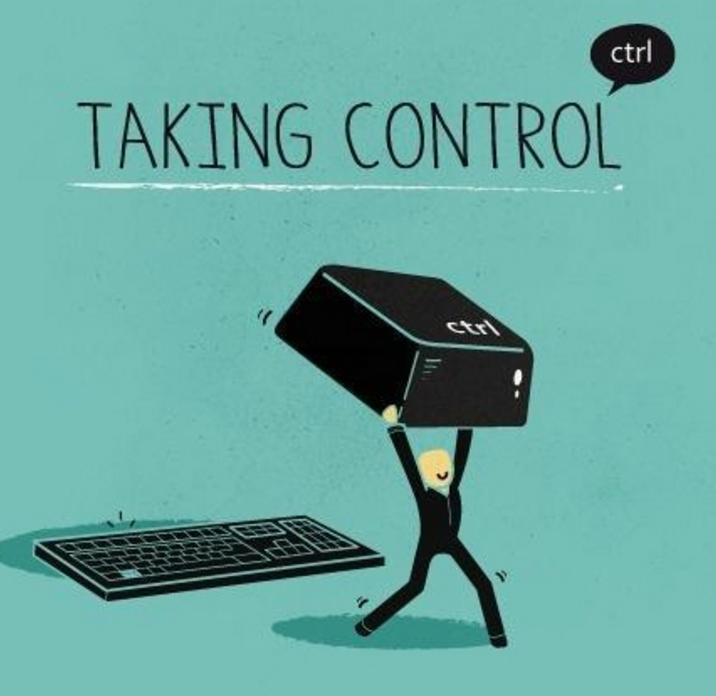 When it comes to overcoming learned helplessness, the most important factor is realizing you’re in control.

When you focus on things you have no control over, it can lead you to feeling hopeless to change your situation. So, instead of doing that – focus on the things you can control.

By focusing on things like your choices, actions, skills, and responses to situations you put yourself in a position to be able to improve yourself.

Start off by focusing on options that you feel you can control and take small steps towards accomplishing the outcome you desire. Maybe you won’t be able to change an entire situation at this time, but maybe you can improve small portions within the situation.

And yeah, you may not believe that you have control, but…you’re wrong.

Use this trick to help you gain control:

What would you tell your best friend to do in this situation if it were them, not you? You obviously wouldn’t tell them to give up. Treat yourself like your friend and believe that you have the ability to make choices.

If you don’t, choices will be made for you. And they’ll probably be bad ones like listening to Nickelback or being zapped by an electric shock.

Go From Helpless to Optimism 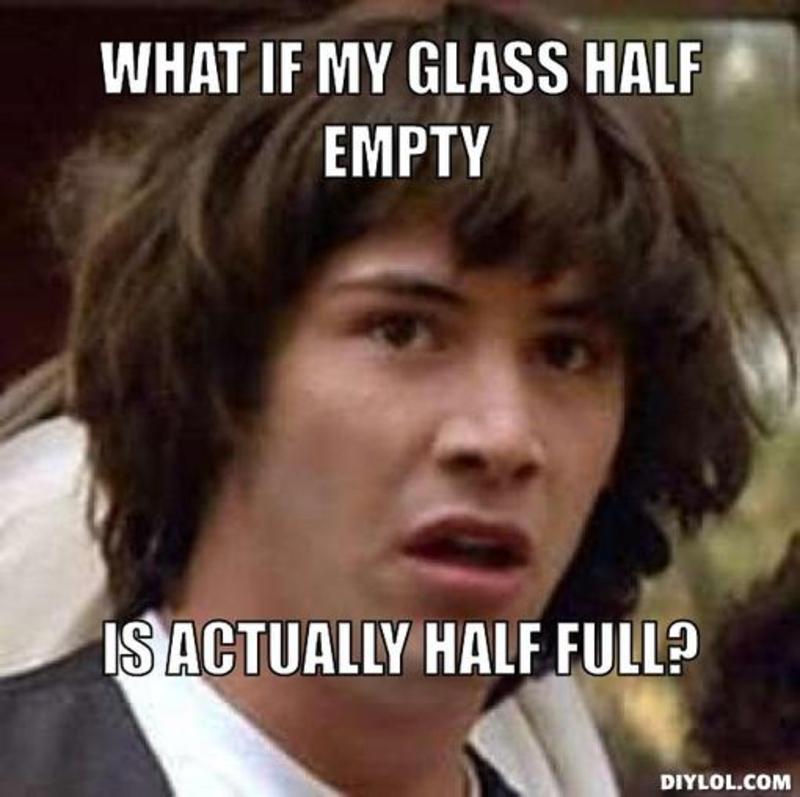 Research shows that learned helplessness can be prevented or reversed by learning to view situations in a more positive way. Doing so helps you see setbacks and failures as temporary and singular.

In other words, believing the cup is half full can help you beat learned helplessness.

Now, being an optimistic doesn’t give you magic powers like the ability to shoot lightning bolts from your fingertips…at least I don’t think it does. But what it can do is help you believe that things will get better. (Which is honestly better than the lightning bolts.)

Because a side effect of optimism is improved energy levels. And  if you have more energy, there’s usually an increase in productivity. The more productive you are, the more successful you’ll be. Do you see where I’m going with this?

It’s like a ripple effect…by change your POV and opening your mind to the possibility that your current situation can and will actually improve. What you once thought to be impossible to change can, in fact, change – just from adopting a different outlook on life.

Three things you can do to help yourself become more optimistic are:

It’s tough, I know to adopt a new state of mind, but trust me, it’s in there – somewhere. I’m optimistic you’ll find it.  🙂

BONUS: Get a cheatsheet of 8 more ways to overcome feelings of helplessness

“You are not stuck where you are unless you decide to be.” – Wayne W. Dyer

One of the hardest things to learn is how to get back on your feet when you’ve been knocked on your ass. Especially when it happens over and over again. But your past experiences DO NOT have to dictate your present or future.

If you do, then there’s good news – you aren’t trapped.

After all, people experience failures everyday (like me), and most are able to pick themselves back up and continue trying. I believe you can be one of those people. You just don’t realize it yet. (but you’ll see I’m right.)

Start by believing you have control over your life.  Choose to live better because choices, even small ones, can beat the sh!t out of helplessness!

The ability to choose cannot be taken away or even given away—it can only be forgotten. Click To Tweet

When we forget our ability to choose, we learn to be helpless. Don’t allow your power to be taken away — do not surrender your power to choose. No matter the situation, there’s always something you can do to make things better. You can overcome your feelings of helplessness.

Even the smallest changes can lead to BIG results.

The mantra of the person who suffers from Learned Helplessness is: “What’s the point in trying?“

Your mantra moving forward is: “I’m going to try whatever the heck I want!”

When we surrender our right to choose, we give others not just the power but also the explicit permission to choose for us. Even if you don’t believe it right now, act as if you have influence over your life. It’s time to unlearn everything you’ve  been taught.

Unlearn helplessness and learn that you’re a badass!

So…are you just going to sit there and get shocked all your life? OR are you going to jump out of that box and punch the bastard who’s shocking you?!

NOTE: No animals were harmed in the writing of this post  🙂

Know someone who feels helplessness? Share this with them and help them take back their life.

What a US President Taught Me About Time Management

Introduction "What is important is seldom urgent and what is urgent is seldom important." - Dwight D. Eisenhower Did you...