Why You Need A Habit Buddy RIGHT NOW

Have you seen those Army commercials where the slogan is “I’m an Army of One?” Do you remember those? (I think they may still be on t.v.) Anyways, the Army decided to replace their standard slogan of “Be all you can be” in the early 2000s with something that speaks more to people’s individuality and independence – this idea that greatness is accomplished when you’re alone: “An Army of One.” 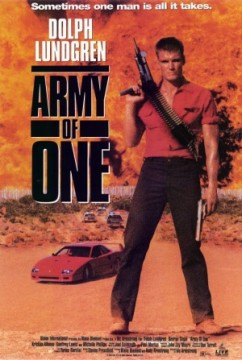 Always looking for an excuse to promote this movie more

I think this commercial really sums up a common mistake people make when they try to change their habits. And it’s one that makes sense if you think about it. It’s engrained in us to approach problems alone – mano y mano. In our U.S. society, it’s very common to praise the guy who does things by himself – who’s self-sufficient. We’re always  in awe of the individual who has done extraordinary things on their own, and see it as a sign of strength that they accomplished all of it alone. The ol’ “pulling yourself up by your bootstraps” story.

We’re taught to believe we don’t need help, we can everything and anything alone, and that awesomeness is our ability to do things on our own. If you want it badly enough and work hard, someday, you’ll get the prize! YEAH!

We ALL need help. No one has ever truly succeeded on their own. The legends and stories just play better when they’re told in that way, BUT there’s always a strong supporting cast that makes everything possible. This independent, “go at it alone” mentality is a common mistake people make when they decide to get healthy.

“This is my burden. No one else needs to be bothered with this.”

WHY IS THIS A HABIT MISTAKE?

One reason why this is a BIG mistake is that you don’t have an accountability system (check that out if you haven’t read it. It’s good stuff. I know coz I wrote it), BUT what makes this mistake distinct is that people who make this mistake have the inability to ask for help. Either they can’t or don’t want to, these people think that asking for help is a weakness when really it shows STRENGTH.

So, we’ve been throwing the word “help” around a lot, and I wanted to take a minute to explain what we mean here just to make sure we’re all on the same page.

When we say “help”, what we mean is asking for support knowing you can’t do this entirely alone. This decision you’re making is a HUGE decision, so it shouldn’t be taken lightly. You need support and assistance like an accountability system or accountability partner.

Surround yourself with a people who will support your goals.

Because if you don’t, then you’re missing out on the opportunity to truly succeed, and you’re just going to be constantly surrounded by temptation. In this case, temptation takes the form of people who don’t support your goals and dreams.

“Come on, why are you even doing this? Just relax.”

“Why are you trying to do that? You know you can’t. You’re crazy”

It’s hard enough deciding to get healthy, but having to deal with that all the time? FORGET IT! No way you’re going to stay on track. Even if you’re Dolph Lundgren with your spiky blonde hair, ice cold demeanor, and big muscles.

[Tweet “Your life is a mirror – it reflects what it sees. Reflect positivity and success. @yochillpill”]

If you hang out with negative, unhealthy, unsuccessful people, then your life will most likely go down that path. NOW, you could be the exception to the rule, BUT the odds are stacked way up against you because of this factoid from Jim Rohn:

“You are the average of the FIVE people you associate most with.”

This is known as the “Law of Averages”. Now, this isn’t to say you aren’t your own person, but when it comes to relationships, we humans are greatly influenced by those closest to us — whether we like it or not. These five people affect how we think, how we act, how we feel about ourselves, and ultimately how successful we are.

Who are the people you spend time with?

Try out the following exercise:

NOTE: Really take your time with #3 because it’s really important. You want to evaluate carefully if those people will really be those who will help you get to the next level you want to get to.

It’s such a simple idea – Are the people you spend most of your time with helping you OR bringing you down?

Don’t be afraid to lose some people in your life whom you like and love – just spend less and less time with those you don’t want to be around anymore, and find people you want to have as your Power Five. It’s going to be hard and kind of awkward, but it means you get to start surrounding yourself with the right people that meet the standard of excellence you’re striving for.

If you think about it, friends should be helping you deal with the problems in your life. You don’t want to take advantage of people, but a true friend should be willing to listen to you – especially if the problem is legitimate. A true friend will be there to give you advice that they think you will need. If your friends aren’t doing this, then they aren’t really friends. Say goodbye to them. Don’t be content being the average of average or mediocre people.

Okay…can I bear my soul with you for a minute?

I’ve always been a proud person – always thinking that no one needed to worry about me and that I can handle things alone. I was always told that I need to be strong and that I should NEVER show weakness (especially as a man), but that thinking is wrong. ALL wrong. But as they say, “pride comes before the fall.”

I know that now.

Can I bare my soul with you?

I clung onto relationships with people way longer than I should have. I loved these people. I thought they were great, but the reality is, they weren’t interested in chasing their dreams and experiencing their potential. They brought negativity to my life – constantly telling me my goals were dumb or complaining about how unfair life is. I couldn’t have that in my life anymore, so I had to let them go.

I know it’s hard because there’s pride involved, and that you don’t want to appear weak. Also, you may have to make some hard choices if you realize the people in your life right now aren’t the people who will help you get to where you want to be. BUT the truth is, you’ll be the strongest person alive because you’ll be admitting you want to be more awesome than you are right now.

You’ll be stronger in the end because you’ll encourage those around you to do the same thing. They’ll see how breaking out of the “lone wolfing” mold so positively impacted your life that MAYBE they’ll realize they don’t need to go on their journey alone either. Maybe they’ll admit they need help too. BOOM – Dominos!

There’s an old Mexican saying – “Show me who you’re with, and I’ll tell you who you are.” You don’t get to decide if the people you associate with shape you or not. It’s going to happen, so do whatever you can to surround yourself with positive people. You want people who’ll support you, hold you accountable, inspire you, encourage you, and celebrate you.

Know someone who would be a good habit buddy? Send this to them and ask them to join your wolfpack!