Are you reading this while looking at text messages, streaming Netflix, or reading an email? Heck, you’re probably doing all three!

Well…don’t congratulate yourself just yet.

Your multitasking habit is unhealthy and you should do something about it. Weirdly, we look at someone who is busy and multitasking and think to ourselves, “Wow, that guy is gangsta – he’s efficient AND effective!”

This is true for your job, your education, and, of course, habit change. No matter where we are or what we’re doing, we can always add one more ball to juggle.

This couldn’t be further from the truth.

When did we decide that staying busy with a bunch of stuff was the way to go?

Hell, the word “multitasking” didn’t exist before the 1960s! (IBM used it in a commercial for a computer). The idea of multitasking has been around for a little more than 50 years..

Don’t fall into the trap of multitasking!

I know what you’re thinking…

“Don’t I get more done when I do more than one thing at a time?”

The truth is, multitasking doesn’t actually make you more productive, and in this post we explore how it actually hurts the quality of your work, costs you time, and harms your health.

So, put down the phone, turn off House of Cards, and sign out of your email! 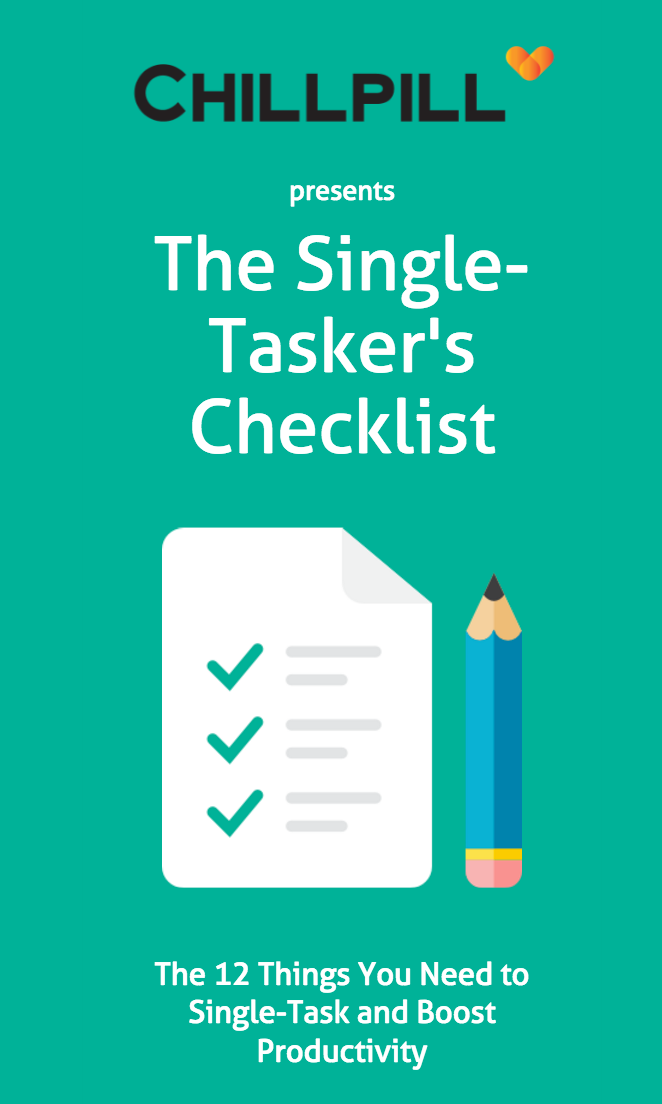 Multitasking Isn’t What You Think It Is

Doing multiple tasks “at the same time” seems efficient — and it would be…if you had more than one brain! The truth is, your brain doesn’t do well when you double up on complex tasks. Why?

Cause it can really only handle ONE thing at a time, especially if the tasks you’re working on affect the same part of the brain. For example, if you’re listening to an audiobook, but writing as well, you’re pulling from the same half of the brain.

What we believe to be multitasking isn’t REALLY multitasking – it’s actually task switching – shifting focus from one task to another.

And constantly switching back and forth between tasks negatively affects your brain’s ability to pay attention. Each time you interrupt one task and go to another, you’re paying a mental fee known as the “switching cost”.

Think of the switching cost as driving on a toll road – soon or later, you’re going to have to pay to go out. And it’s not a cheap toll either. It’s pricey! (Too rich for my blood.)

Let’s use an example to show how bad the switching cost is, and we’ll use something I know you do every single day – randomly checking your email throughout the day.

A 2003 study found that, on average, you check email once every five minutes. The mental toll? It takes around 64 seconds to resume the last thing you were doing before you checked your inbox.

So, this means in 1 hour, you’re checking your email 12 times! And on top of that, you’re losing 12 minutes to transition out of checking your email. That is almost 30 minutes of time wasted. Studies show the average professional spends about 23 percent of the day emailing, which is about 2 hours of a workday, which means you’re wasting 4 hours of an 8-hour workday because of multitasking!

(Note: You could have important things in your email, but checking your email every 5 minutes isn’t the best use of your time.)

This is just one example of the “switching cost”, and it’s just the tip of the iceberg.

Experts estimate that switching between tasks can cause a 40% loss in productivity. Studies also show you’re actually slower in completing tasks when you multitask.

Multitasking is LITERALLY killing your productivity and robbing you of time!

At this point, you’re probably thinking, “Fine, I may not be as fast as I thought, but at least I’m putting out good stuff, right?”

The quality of your work is worse when we multitask.

Not only is multitasking taxing on your brain, it’s harmful to your health!

Multitasking leads to stress because you’re setting an expectation of completing a number of tasks in a time period that’s not possible. When you do this, you increase your levels of anxiety. This puts you in a constant state of  “high alert”.

All of this leads to an increased heart rate and levels of stress, which cause you to feel overwhelmed, drained, and frazzled.

In the short term, stress makes you feel lousy. In the long term, it can seriously threaten your health.

The National Institute for Occupational Safety and Health found that on-the-job stress can cause headaches, stomach trouble, and sleep problems. Chronic work-related stress can lead to chronic problems, including back pain, heart disease, and depression.

A study at the University of Sussex shows that multitasking physically damages your brain on top of emotionally battering it. The study shows lower brain density in the part of the brain responsible for empathy, cognitive control and emotional control.

Ummm..multitasking should come with a warning label on its packaging!

A study found that multitasking can have the same effect on your intelligence as staying up all night long OR being high on marijuana.

All of that multitasking is making “I and you”(or is you and I?) dumb..look. Huh?

How Do I Quit the Multitasking Habit? Instead of trying to do several things at once—and often none of them well— be singled-minded and focus on the moment.

Click HERE to get 12 tips on how to stop multitasking

This is harder than it sounds because it’s hard to break the habit of multitasking once it’s been learned. But just because it’s hard doesn’t mean it’s impossible. There are things you can do to help you change your habit and increase your chances of success.

Here are FIVE tips on how to focus and single-task (get 6 more HERE):

Look at your huge to-do list and decide which are important and which aren’t. Focus your day on the single most important task – the one that ABSOLUTELY needs to get done. Spend the rest of your time on what’s important. If there’s time after that, reward yourself, and then get to the unimportant stuff.

Use the handy dandy “Eisenhower Box” below to help!

Want a printable Eisenhower Box? Right click the image to save it

Clean your desk or whatever your surroundings are and get rid of clutter to make sure things like a slinky can’t draw your attention away.

As we discussed above, emails is a HUGE time suck – basically 30 minutes of every hour is wasted on it. Research also shows that workers who are removed from their emails show lower stress levels. To help you focus on your tasks (and keep you from having a nervous breakdown) schedule times each day to check emails. The frequency depends on your professional. (I personally try to keep it to 2x a day.) Don’t forget to turn email notifications off as well.

You can even add an “auto-responder” letting people who email know that you aren’t available.

Schedule the Task and Take Breaks

Look at your calendar and block off time to laser focus on your task. The amount of time is really up to you. Check out the Pomodoro technique as a way to get into the habit of blocking off time to work. (NOTE: The link lists a few apps to help get into the “tomato” habit.)

Pomorodo means tomato in Italian, and I think this is a tomato…not 100% certain

DON’T overwork yourself. If you do, you’ll use up all of your willpower, which spells disaster for your productivity. Take breaks now and then. Stretch out, take a short walk, or even just take a few deep breaths before you go back to your task.

Those are FIVE strategies to begin single-tasking.

Click HERE to get 12 tips on how to stop multitasking

Single-tasking is going to feel counter-intuitive at first, but if you commit to the strategies above, you’ll find yourself creating a habit of giving your full attention to a single task. Remember that study that shows lower brain density due to multitasking? The good news is that the damage can be reversed if you exercise your concentration skills and remove distractions. (There, another reason for you to single-task.)

In the end, you’ll get better results, feel less stressed, and feel like you’ve accomplished more than you ever have. You’ll get into what’s known as flow.

Before I Quit…Are You Sure There Aren’t Good Examples of Multitasking? It IS possible to do more than one thing at a time. BUT you can only apply this skill to mindless tasks like walking and chewing gum at the same time.

However, when you try and do this with tasks that require focus such as driving and texting at the same time, it doesn’t work. (And in this particular example, it’s also very dangerous.)

We can’t actually focus on more than one task at a time. It just can’t be done – well, it can’t be done productively.This constantly switching negatively affects your brain’s ability to pay attention.

“By using the full capacity of our mind, we can complete tasks quicker and better.“

For many of us, multitasking is a way to keep up with the grind. We live in a world where everything seems so fast-paced…so MUCH to do, so LITTLE time.

To make sure we squeeze everything in, we multitask and do as many things as possible at the same freakin’ time. IF you aren’t juggling a bunch of stuff all at the same time, you’re perceived as a lazy bum!

It’s part of the reason why you feel like there’s so much to do, but it never seems like anything gets done even though you’re juggling a ton of different task all at once. All you’re doing is keeping yourself busy, but you’re not actually accomplishing anything. Being seen as someone who multitasks shouldn’t be thought of as a badge of honor. As if you should be proud that you’re running around like the rabbit from Alice in Wonderland.

Research shows us that the human brain isn’t meant to multitask. Even worse, research shows that multitasking can have harmful effects on your brain and your health.

Save yourself the stress and the brain aches, and focus on one thing and do awesome at it!

I know, I know…in the real world, cutting out distractions is really hard to do – probably impossible! I hear you loud and clear.

But you only have so much time in the day – shouldn’t it be spent on what’s important and not what feels important in that moment?

It may not be easy to quit, but multitasking is clearly not a better alternative. You need to get out of the multitasking habit.

The world around you is already chaotic enough – give single-tasking a shot.

And in the end, you’ll end up improving your work quality, lower your stress, and become more efficient.

What are your best tips for achieving single task focus? Share them with other readers in the comments below.

Changing Habits: 5 Ways You Could Be Doing It Wrong

“First we make our habits, then our habits make us.” Charles C. Noble INTRODUCTION We all have habits we want...