Inside Out the Emotions Behind Procrastination 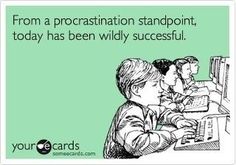 Why do we procrastinate?

The short answer is pretty simple, I think. Procrastination is more than you simply spending too much time on Facebook or binge watching House of Cards.

At its core, putting off your responsibilities for what seems like innocent pleasure is a powerful emotional coping mechanism.

Of course no one wants to procrastinate. We just can’t seem to shake it. For many of us, procrastination is a powerful force that keeps us from completing tasks both big and small. It keeps us from completing simple tasks like washing dishes or responding to email to bigger, life goals like saving for retirement or beginning to eat a healthier diet. An estimated 5 percent of Americans procrastinate in ways that seriously affect their quality of life. The force is strong in this one… 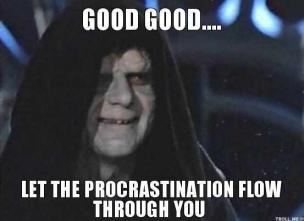 None of it makes any sense though – how can we have good intentions and yet be so totally unable to follow through on them?

As a self-identified procrastinator, I always thought I put off doing things because they were difficult, I didn’t know where to begin, or that I managed my time poorly. But no matter how hard I tried to manage my time better or willed myself or told myself “I’m never, ever going to do it again,” I just kept falling back into the same trap over and over.

It was at this point, that I realized I was avoiding things that made me feel bad about myself, involved other people who might be judgmental or other things associated with uncomfortable feelings.

Some like to think that the solution is simply to jut “take action.” This is basically the same as telling someone who is clinical depressed to just “cheer up.” (Not the best advice)

The Emotion of Procrastination

At its core, we procrastinate to keep ourselves happy —which, in its own weird way, makes sense. Who wouldn’t rather be checking Facebook or taking a nap over working on school assignment or a project for their boss? It’s all good until we’re pulling an all-nighter to meet deadlines we had weeks to prepare for. 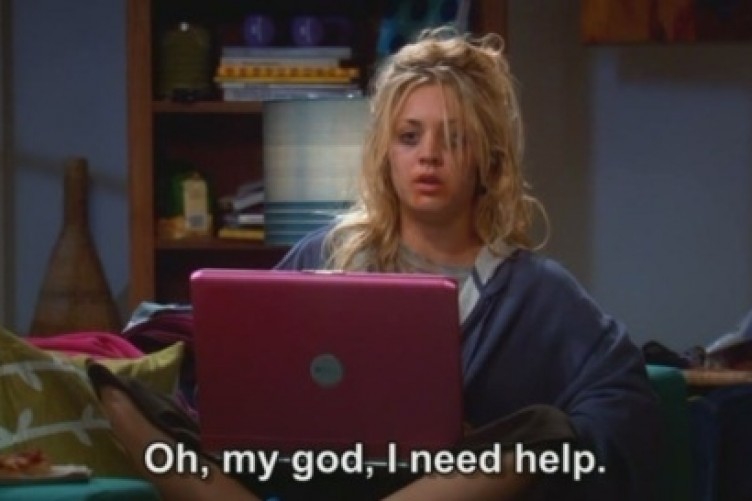 And as the deadline draws closer and closer, our procrastination causes more shame and guilt, which in turn leads us to procrastinate even more – creating a vicious self-sustaining cycle.

Well, it’s time to break that cycle with our procrastination back breaker!

Okay…since we’re not going to resort to actual physical violence, we’re going to have to break the cycle some other way.

Since procrastination is an emotion-management problem, we need to first understand the emotions behind why we procrastinate in the first place. It’ll give us clues into how we can develop strategies for dealing with the emotion, so we can get started on our important projects right now, rather than waiting for tomorrow. (Projects like growing a badass wrestling mullet.)

Here’s what I’ve discovered as the emotions we avoid when we procrastinate and put things off until later .

With each and every one of these emotions, you have to realize that the reason you’re putting off a task is because you’re linking more pain to starting than doing nothing at all. You also link more pleasure to not starting than you do to taking action.

So let’s look at emotion in a little more detail.

You probably don’t know this, but your emotions are pretty bad at planning for the future. They’re all about the here and now.

As a result, you put off errands and tasks because they cause you stress. Even if you know, in the long-run, you’ll be more stressed out not following through on the task, your emotional mind doesn’t seem to give a damn.

Studies show that people who are self-compassionate are happier, more optimistic, and less anxious and depressed. But here’s the best part – they’re more successful, too. A splash of self-compassion goes a long way to reduce your stress and improve your performance, by making it easier to learn from your mistakes.

Another way to combat stress-related procrastination is to use If-Then logic on your stress. Just decide what kind of response you’d like to have instead of feeling stress, and make a plan that links your desired response to the stressful situation. For example, you can come up with something like, “if a deadline is approaching, then I’ll keep a cool head.” (Coz cool heads prevail.)

Of the five types of procrastination, this one is the most common. And that shouldn’t be surprising to anyone. We all hate doing things we think are time-consuming and boring. Like, who the heck likes to watch paint dry or enjoys folding laundry?

The good news is that procrastination from boredom is also the easiest to overcome:

Confusion is probably the most subtle form of procrastination out of the five.

Basically, procrastination from confusion is when we put off doing something because we aren’t exactly sure what we need to do or where to begin. Usually this happens with complex or new projects that are foreign to us.

If you are suffering from this type of procrastination there is only one solution – plan.

Planning out exactly how you’re going to do the activity will give you the clarity and confidence you need to get started. Now, you’re probably wondering how you start something that you’ve never done before and aren’t sure how to start. Well, I think you just answered your own question, didn’t you?

If you’re drawing blanks on what to do, then you need to plan around gathering the necessary information. Google it, go to the library, ask questions, etc. Figure out what you need before you feel comfortable moving forward and get that information.

Procrastination from Lack of Energy

Poor energy management is another primary cause of procrastination.

This means your body’s putting off an activity because it simply doesn’t have the energy to do it. This happens when you believe that the task is too demanding. The weird thing is that this happens even though you believe that you’re more than capable of doing it…you just wish you had the energy.

An example of this is going to the gym.

How many times have you decided you were going to hit the weights, but then convinced yourself you were too exhausted from sitting on your butt all day answering emails?

The irrational thing about this is that exercise actually boosts your energy and gets blood flowing, so your lack of energy excuse is an emotional reaction.

So how do you overcome this lack  of energy?

In addition to owning up to the fact that your procrastination is be caused by a lack of energy, you can overcome the lack of energy by boosting your energy levels (mind-blowing, I know). It doesn’t even take much energy. You can restore mental clarity from just closing your eyes and taking three deep breaths.

The worst cause of procrastination and often the hardest to remove is fear.

This happens whenever your brain perceives something you’re about to do be to painful, so it creates the emotion of fear to keep you from taking action. The reason why it’s so dangerous is because your fear can drag out the task indefinitely.

The first step to overcome the fear procrastination is admitting to yourself that you’re scared – that you feel the fear. Don’t rationalize or excuse, just accept the truth. Without admitting the fear exists, you can’t fight it, and lose all power to control it.

Don’t worry if you realize that your fear doesn’t make any sense, or if you feel stupid or immature for experiencing it, just admit you feel it and move past it.

Once you’re able to accept the truth of our situation you need to overcome your fear. Take the following steps to break down your fear: 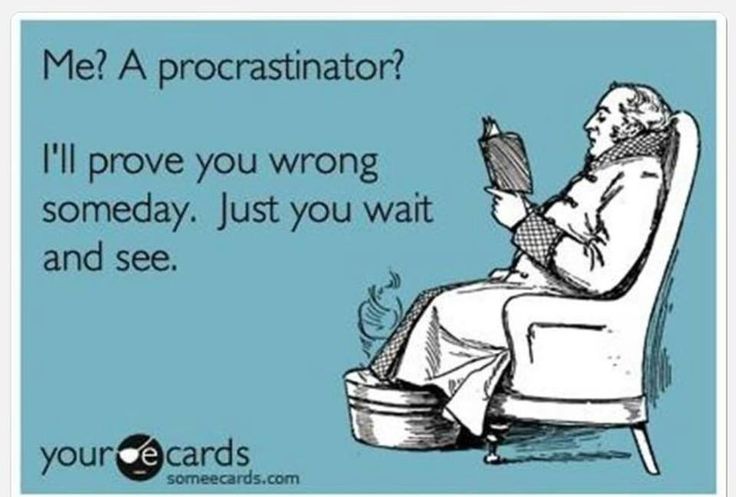 We all procrastinate from time to time – sometimes it’s mundane things, but more often than not, it’s tasks that require more time, more commitment, and have higher stakes.

Conventional wisdom says we procrastinate because of poor time management and lack of willpower. And why not, right? Seems obvious that if you’re going to be “chillin’ out, maxin’, relaxin’ all cool” instead of working that you do have poor time-management skills.

That’s how I always understood it anyways…but this definition never seemed right to me.

Procrastination isn’t voluntary – you can’t help yourself even though you know you’ll be worse off because of it. And understanding why we’re prone to procrastinate and how to work with the habit, or around it, can help us overcome it.

Procrastination is more about our emotions than it is about laziness or just being “bad at deadlines”. It’s an emotional struggle of dealing with 5 feelings that we try our damnedest to avoid.

Procrastination can take many forms, but at the core of our discomfort we find fear, stress, confusion, boredom, and energy – the anti “Inside Out” team.

Left unchecked, these emotions drive us to cling on to the hope that if we procrastinate long enough, our situation will improve, or our doubts will magically be replaced with newfound clarity and courage.

We tell ourselves that ‘one day’ we’ll be ready to make a change, or take a chance, but the timing needs to be better, our confidence stronger, our circumstance better

No matter the creative reasons why that ‘one day’ can’t be today, putting our lives on hold is something we just can’t afford to procrastinate.

It’s important that we look beyond our conventional understanding of procrastination, and tackle the emotional discomfort that’s inherent in making meaningful changes in our work and lives. Changing those links in your brain will help you remove the procrastination. When you can change the balance of pain and pleasure you’ll gain more pleasure from acting then not acting and you can immediately be rid of procrastination.

So the next time you feel like procrastinating, ask yourself, “what am I feeling right now?”

It’s kind of sappy to get all emotional, but it’s going to make a world of difference in the long run. It can turn your procrastination inside out!

Have you discovered any strategies that have helped you overcome a procrastination habit?

Share your experience with the rest of us procrastinators in the comments below!

Why Do We Procrastinate?

INTRODUCTION Have you ever procrastinated before? I'm kidding. That's a dumb question. I already know the answer. Of course you...