We’re all familiar with this phrase. Bigger house, bigger car, bigger money bags. BIG is so in right now! The same is true for our health goals, right? All you need is willpower anyways to smash your goals.

Have you ever tried to set goals, came up with a BIG list, and decided to do all of them…at the same time? Maybe for your New Year’s Resolution. (How’s your resolution going by the way? If you gave up, you may want to read this to find out why.)

“I’m going to cut out sugar completely from my diet!”

That’s way too drastic, and this is a big (see what I did there? tee hee) the problem most people make when they commit to habit change. People try to change too many habits at once, succeeds for a week or two, and then BOOM, everything falls apart. As quickly as these goals are set, they’re abandoned. They fail before they even begin.

People fail because of willpower – not the lack of it, but the heavy dependence on it.

Willpower is self-control. It’s the ability to control your actions and impulses, even when it’s hard or when a part of you doesn’t want to. Think of willpower as deciding between short-term pleasures and long-term benefits.

Can you see where this could lead to problems? It’s basically Dr. Jekyl and Mr. Hyde in your head! Part of you wants to go the right thing while the other part is telling you the opposite. You see the long-term benefits of being healthy, but you don’t realize how hard it is to fight off those short-term pleasures. You try to run away from pleasure and tempation, but they always seem to be able to catch up.

The problem with willpower is that it’s finite. When we make decisions that are different from our normal habits, we use up some willpower! Now, let’s look at that list of habit changes again real quick.

Can you see how using willpower to do just ONE of those would be hard?

If you try to drastically change too much at the same time, you’ll use up all of your willpower and fail at ALL of them. This is one of the reasons why so many people give up on their resolutions by the third week of January (we’ll touch on another reason later).

So rather than relying on willpower and overdoing it, start small.

And you’re probably wondering, “Isn’t this cheating? What about all of those people who are able to rely on willpower?”

“If you want it bad enough you’ll do it”

Those people are full of sh*t and are missing the point of life. First of all, they have no right to shame anyone for struggling with their goals. If you failed in the past it’s not due to lack of want, desire or willpower. Sure, being healthy requires some sacrifices, but life shouldn’t suck either. Self-denial isn’t going to make you healthy and happy. Stop trying to push a boulder up a mountain. Instead, start with a  pebble. 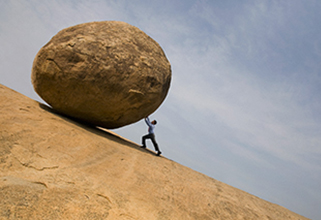 Don’t try to change too much at one time. You’ll just get overwhelmed, quit, and go back to your usual habits. We’re creatures of habit, and we avoid change. Remember, it takes 60 days to create a habit. So you need to keep at it, every day for 60 days, for your  new healthy habit to stick. The first few weeks are the hardest, but the good news is that it gets easier with each day that goes by.

Start with ONE new habit. A small habit – what we call a “Small Win” here at Chillpill.

Want to run every day? Start with taking a 5 minute walk.

Want to wake up at 5 a.m. every morning? Wake up 5 minutes earlier than you normally do.

Want to kick caffeine? Try drinking decaf once a week.

Make the habit change so small, that it’s almost impossible to miss. Most importantly, you want it to almost impossible to notice. Honestly, it’s not really the habit that matters, it’s proving to yourself that you are capable of that habit. That’s what’s important. Doesn’t it make sense to focus on what you can do rather than trying and failing again and again?

After a few weeks of doing your Small Win, you can increase it. Wake up 10 minutes earlier. Walk for 10 minutes and so on.

Instead of relying on willpower, remember that:

The Dirty Secret About Overnight Success They’re Hiding From You

“...it takes years to become an overnight success.” - Richard Branson INTRODUCTION Have you ever watched a movie where you have...